Cuttings fall into three main groups, but whichever method you use it is essential that cuttings are taken from healthy plants:

Thanks to the HTA

How to Feed Your Tropical Plants?

What Do the Numbers on Fertilizer Mean? 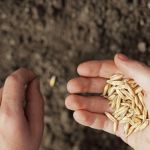